What do you think would happen if you killed yourself tomorrow? Would anyone 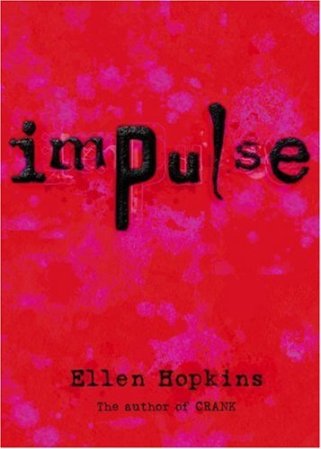 care? Would anyone miss you?

These are the types of questions three teens, Conner, Tony, and Vanessa, ask themselves in Ellen Hopkins’s novel, Impulse.

Aspen Springs is a treatment home for children and teenagers who have been through the worst: abuse, drugs, and suicide attempts. Conner, Tony, and Vanessa are all new and all there for the same thing. They each wanted to die so badly that they tried to kill themselves, but failed.

Conner is your typical jock. He’s tall, muscular, handsome, and has wealthy parents. But his parents need for him to be at his best all the time, to be just like his twin sister, Cara, is what drove him to shoot himself in the chest, winning him a one way ticket to Aspen Springs after the bullet hit bone instead of his heart.

Tony is homeless. His father left him when he was little and his mother was killed by a crazy boyfriend. He finally gets the family he’s always wanted when a stranger, Phillip, takes him in as his foster son. But when Phillip dies and Tony is written out of his will, his life takes a bad turn, leading him to down pills with alcohol, only to wake up in a puddle of his own puke with a cop standing over him.

Vanessa’s mother was diagnosed with bi-polar and schizophrenia after her brother was born. Unfortunately, Vanessa discovers she is also bi-polar and goes through the ups and downs without treatment for years until she tries to end it all through cutting. When her brother bursts into the bathroom and finds her before it’s too late, she is sent to Aspen Springs to find out exactly what is going on in her head.

When Conner, Tony, and Vanessa’s lives intertwine, will they be able to help each other survive Aspen Springs long enough to be sent home, or will they not be able to stand the pressures of daily living and give in to their deepest desire for death?

Ellen Hopkins would definitely have to be one of my favorite writers. While her books are very lengthy – ranging from 500 to 600 pages – they are written in a poetry format, the words barely taking up the entire page and making them quick reads. The one thing I love about all Hopkins books, and Impulse especially, is how relatable the characters are. The personalities that Conner, Tony, and Vanessa had made them seem so lifelike that it felt like I had known people like them in high school. She also is able to tie in a moral without it being preachy and to sketch a scene and make it believable without using too many words.

The only problem I had with Impulse was I wanted to know more about the characters lives. Hopkins does an amazing job at keeping certain aspects of the character’s lives a secret until the very end when they tell-all, but I still had questions about the characters after the book was over. It would’ve been interesting to see what happened they go home, but sometimes those things have to be left up to the reader’s imagination (I know because it’s a technique I use often). But there are other parts about their past I would’ve liked to know more. I also felt that the secret Vanessa shares at the end – which I will not state her because it would just ruin the book – comes from far left field. It makes sense with some things she said earlier in the story, but it was definitely not something I had expected.

There were certain scenes that I wish were expanded on as well. For example, on Easter Sunday, Conner and Tony go with a few other teenagers to a supervised church visit. It turns out that it’s to the church that Conner goes to. The scene ends with Conner freaking out, saying he can’t go in because his parents are there. I would’ve liked to see what happened after that. Did they switch churches? Did they go in anyway? Did Conner have to confront his parents and twin sister in public? Without the scene going further there’s a bit of an understanding that they didn’t go into the church, but I still would’ve liked to see a bit more conflict. This issue of not having a scene expanded on enough arises in a few other spots, but I guess the reader is left to fill in the blanks.

Overall, Impulse is an amazing book and a must read for all teenagers.

One thought on “Impulse by Ellen Hopkins”