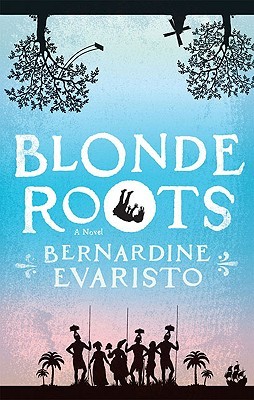 Kidnapped as a young girl from Europa and enslaved in Ambossa, Doris receives a letter one day that gives her the opportunity to run away and return to her home. But what would happen if her owner catches up with her? Or will she be able to make it back to Europa and find out if her family is still alive? Her life hangs in the balance as she walks as quickly but casually as possible through the city to get to the meeting point in time.

I’m usually not one for historical fictions, but Blonde Roots was an interesting take on the slave trade, where whites were the slaves and blacks were the slave owners. I liked that it made the individuals from Europa look like they were uncivilized, even though they do things that we see as totally normal (i.e. be fully clothed, blow our noses in a tissue, etc.). I also liked Bernardine Evaristo’s writing style and the world and characters she created. She did a great job of tying a lot of loose ends together while still keeping the story interesting and realistic.

By time I got to the second part in the book, I was hooked so I was a bit disappointed when it changed from Doris’s point of view to her owner’s point of view. I was afraid it would start to read more political since he was explaining why he owned slaves and was not a bad person for doing so. But it actually wasn’t as political as I thought it would be, and after a few pages I was hooked again.