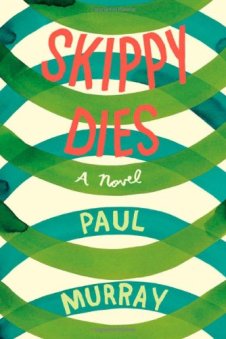 Within the first few pages of Skippy Dies, Daniel “Skippy” Juster, a second year attending Seabrook College, well… dies. For the next 600 pages, the reader learns all about Skippy, his friends, and the girl he loves, and all the aspects of his life that lead up to that moment, as well as what is left after Skippy is gone.

At first, Skippy Dies took me a bit to get into. The writing style is a bit different than I’m used to and so I found myself re-reading sentences or paragraphs just to make sure I read it correctly. But after, I believe, the first 50 pages or so, my brain became accustomed to it and I got sucked in. Skippy Dies is more than just a great story. It is somewhat heartfelt and more times gut wrenching. It dabbles in so many different topics: string theory, drugs, suicide, friendships, coping with loss, assault, bullying, eating disorders, and the list goes on and on.

One of my favorite aspects about this book is anything that was brought up in casual conversation wasn’t brought up just because. It could be on the next page or it could be 100 pages later, but that little conversation came back to mean something and became part of the overall plot of the story. Which to me was pretty amazing because there were so many different topics brought up in the book (as mentioned above) and Murray managed to connect them all and make them all be able to play off of one another and work together and he managed to bring every topic to a close very neatly that it made me think: “Wow, this guy has got talent!” I also liked how the narration was different depending on what character’s point of view the story was being told from and what mindset they were in at the time. Murray managed to write whole scenes without overloading on dialogue and yet still having the scene make sense and not feel like you missed anything important. Dialogue and non-dialogue moments were balanced nicely and made the scene feel complete and not overdone.

However, while I thought that Murray did a great job at tying up all the different plots and subplots, I still felt like there was one story that didn’t really get it’s finish: the relationship between Howard and Miss McIntyre. Sure, you got to see one final (excruciating) conversation between the two, but I just wasn’t satisfied. I didn’t really feel like it closed anything. Just proved that she was heartless. And maybe that was the point, but I still want more.

With the barrage of topics this book brings up, Skippy Dies is a must read for everyone, no matter age, race, or lifestyle. This is a book about humanity and being human. It’s also very well written and addictive, so go read it!