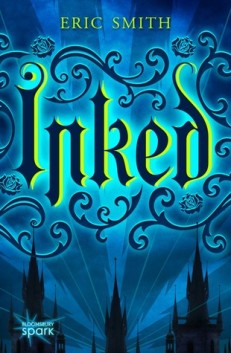 What if a tattoo held the answers to your fate?

Unsure of who he wants to be, Caenum is worried about what the magic ink will reveal when he receives it on his 18th birthday. But when something happens to the Scribes scheduled to give him his Ink, Caenum has more to worry about. Namely, The Citadel who are now after everyone he loves.

With the help of his best friend Dreya and a reluctant new companion Kenzi, Caenum must navigate the world outside his little town, dodging both The Citadel and Unprinted who are after them, to find Sanctuary all while discovering the things he never knew hiding just beneath his skin.

If you’re looking for a fast read, Inked by Eric Smith is your book. I was able to read this book in about two days. Magical and addicting, Smith is able to create a world without throwing too much at the reader at once. He slowly unravels the world and the characters, which was great because it led me to believe that certain things would happen, only to be surprised later when something I wasn’t expecting occurred. My favorite character was Dreya. I thought Smith did an amazing job at describing her and I loved the dynamic between Dreya and Caenum.

Overall, I loved the premise of this book. However, I wish that Smith had fleshed out the characters and the world just a bit more so the reader could really get a feel for everything. Luckily, there is a sequel so I can return to this fascinating world and find out what happens to the characters I became attached to.