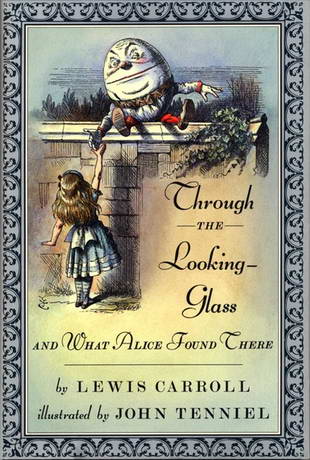 We join Alice again for another short adventure, but this time not to Wonderland. Instead we travel through the looking glass in her house into the world on the other side. Here things are somewhat similar, only backwards.

Once in the looking glass world, Alice meets the Red Queen and confides in her that she, too, would like to be a queen. The Red Queen tells her that she only needs to get to the 8th square on the chess board to achieve this.

On her journey she meets a new cast of characters, including Humpty Dumpty, Tweedledee and Tweedledum and some very talkative flowers. There are also some characters who we have met before with some smaller roles. It doesn’t say it right out, but the illustrations make it seem that the messengers, Hatta and Haigha (pronounced like ‘mayor’), resemble the Mad Hatter and the March Hare.

Through the Looking Glass is another great example of one of the best children’s books. I always feel that it doesn’t get enough credit, though, because usually adaptations of the book into film usually combine the two stories until the title Alice in Wonderland. For example, the mad tea party and the unbirthday song end up together in the Disney version. However, the mad tea party is in Alice’s Adventures in Wonderland and unbirthday’s are mentioned by Humpty Dumpty in Through the Looking Glass.

But it’s understandable why they combine the two stories together. Both of them are short (only 120 pages in length) so it would be difficult to make both their own separate movies. They also work together very well. Although Alice isn’t in Wonderland in Through the Looking Glass it’s almost as if she is. The experiences she has are very similar in both worlds, but at the same time different enough so the stories aren’t exactly the same.

One thought on “Through the Looking Glass by Lewis Carroll”